Total Suspended Particulate (TSP) refers to all of the liquid and solid airborne particles found in the ambient atmosphere. Particles less than 10 micrometers (microns) in diameter are called PM10. These are small enough to be inhaled into the lungs posing a significant health risk. 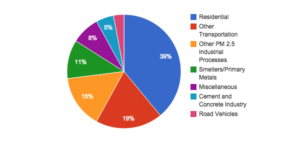 Acid aerosols are among the smallest particles comprising PM10. They are generated in the atmosphere when sulphur dioxide (SO2) and nitrogen oxides (NOx) are transformed into sulphuric and nitric acid compounds.

Many studies have shown that particles affect us all. However, certain groups seem more sensitive to particulate pollution. Studies show that children with respiratory symptoms, as well as the elderly, are more susceptible to the effects of PM10. PM10 pollution causes greater increases in mortality among the elderly than in other age groups, as shown by Marzia Simoni1 in a 2015 scientific journal. Certain groups of people have lower thresholds for responding to particulate pollution. These groups should take extra precautions to limit their exposure during high pollution days.

Particles smaller than ten microns (PM10) penetrate deep into our lungs. Here, chemicals ranging from metal compounds to acid droplets react to reduce lung function and produce other effects leading to increased mortality. Pope & Dockery2 published in a 1991 journal article that children suffer temporary reductions in lung capacity during and following higher PM10 days. Public Health Ontario reported in 20133 that increased PM10 was associated with an increased number of deaths. Other studies confirm these findings. The pollutants which make up PM10 represent a serious threat to our health.

Currently, the Ontario Ambient Air Quality Criterion for Total Suspended Particulates (TSP) is 120 micrograms per cubic metre (ug/m3) over 24 hours, and not greater than 60 ug/m3 annually. There is no standard for PM10 .

The Ontario Ambient Air Quality Criteria for PM10 is 50µg/m3 over 24 hours and 30µg/m3 over 24 hours for PM2.5. While these are the standards, it is recommended that decision makers aim for ambient levels of PM2.5 to be no more than 25 µg/m3 (24 hr) at single facilities so that the various airsheds in Ontario are able to reach Canada-wide Standard targets.6

How can you help?

REDUCE YOUR OWN EMISSIONS: Decrease the amount you drive, and keep your car well tuned; avoid burning wood in your fireplace at home on calm nights.

BE INVOLVED: PM10 standards need to be established. Write letters to the Minister of Environment and to your local MPP. Register complaints about air quality.