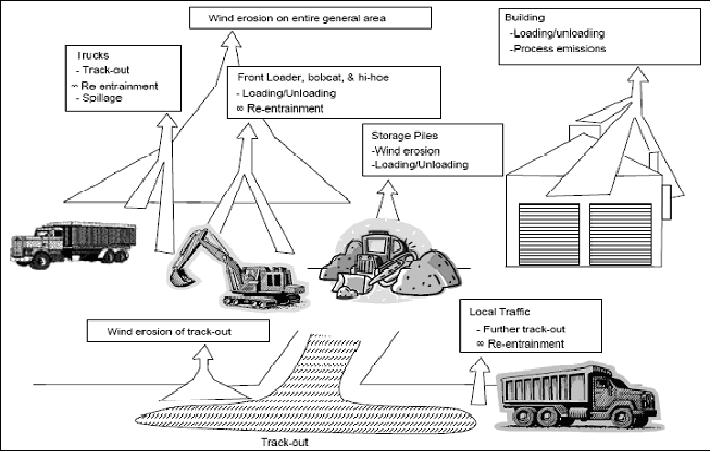 Airborne particulates are divided into two groups based on their size and health impacts. PM10 particles, with a diameter less than 10 microns, can be inhaled into the upper respiratory tract. PM2.5 has a diameter of less than 2.5 microns and are inhaled deep into the lungs. The smallest particles in the PM2.5 fraction are called “ultrafines” and these tiny particles (less than 0.1 micron) are readily absorbed into cells and reach the bloodstream.

Clean Air Hamilton has identified dusts and particulate matter, including road dusts, as a significant source of airborne pollution in Hamilton. Residents can learn about current levels of particulate matter in the City from the Hamilton Air Monitoring Network (HAMN) website, which includes real-time data from a number of air quality monitors throughout the City.

What are Dusts and Particulate Matter?

Airborne dusts can consist of particulate matter of a variety of sizes and are created by a number of different source types.

Fugitive dusts arise from non-point sources, and include road dusts, agricultural dusts, dusts that arise from materials handling, construction operations, outdoor storage piles, etc. These are dusts that are not airborne to begin with, but are sent into the air primarily by wind or vehicle traffic. The compositions of fugitive dusts and road dusts vary depending upon the materials used or stored, adjacent land uses, local emission sources and traffic loads. For instance, dusts created by building demolition will be composed of whatever the building was constructed of, whereas agricultural dusts will include soil, as well as any fertilizers or pesticides that may have been applied.

Road dusts consist of particulate matter from vehicle exhausts, tire wear, pavement wear, brake wear, and can result from track-out (trucks dragging mud or dust off site and then depositing it to the air) from construction sites and industrial sites (particularly from unpaved roads), blow-off from construction sites, and the deposition of materials from the air, including industrial particulates and vehicle emissions. Road dusts can contain elevated levels of toxic substances such as chromium, manganese and polycyclic aromatic hydrocarbons (PAHs). 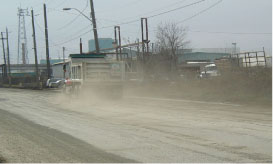 Increasing airborne Particulate Matter emissions in the City of Hamilton are a concern both for Public Health and for the community at large. The Dust and Particulate Matter Working Group, a sub-committee of Clean Air Hamilton, has undertaken a number of initiatives over the last few years to attempt to address these issues. The latest, a pair of handbooks on managing dust and particulate matter emissions for construction and demolition projects, has been completed!

The first handbook is directed towards contractors and is a comprehensive document describing many technical mitigation measures commonly applied on construction and demolition sites. You can view it here: 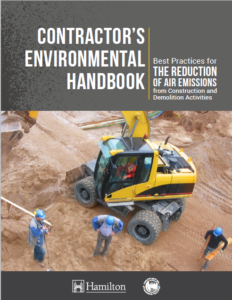 The second is a smaller document meant for homeowners engaged in DIY construction or demolition projects, and contains user-friendly directions on how to control emissions for the health of the homeowners and their neighbours. View it here: 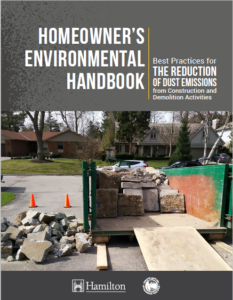 Any questions/concerns about the dust handbooks can be directed to the Air Quality & Climate Change Coordinator (cleanair@hamilton.ca).

Dust and particulate matter have received less attention than other forms of air pollution historically, perhaps in part because dust is so common that it doesn’t seem like it can be harmful. However, as epidemiological information on the health impacts of particulate matter becomes more defined and better known, this is starting to change, and regulations and requirements for the control of dust are becoming more common.

There are many simple and cost-effective measures for dust control, including tarps, watering surfaces, wind fencing, vehicle cleaning stations, properly equipped street sweepers, and worker safety equipment such as dust masks where appropriate.

Dust and particulate matter that migrates off of work sites is the responsibility of the Ministry of Environment and Climate Change. Section 49 of Ontario Regulation 419/05 states that no contaminant shall be carried beyond the limits of the property on which your construction or demolition is taking place unless every step necessary to control the emission of the contaminant has been implemented. The easiest way to control these emissions is to prepare a contaminant control plan ahead of any construction or demolition activities. Click here for Regulation 419/05, and here for more information on contaminant control plans.

The public health impacts of dust and particulate matter are the responsibility of the City of Hamilton’s Public Health Services. Research on the health effects of dust and particulate matter is made available on this website. Template Dust Management Plans are being developed to communicate best management practices for dust control at construction and demolition sites.

The City of Hamilton’s Public Health Services, the Ministry of Environment and Climate Change, and the Ministry of Labour jointly presented a workshop to Hamilton’s construction industry about best practices for dust management and regulatory requirements from all three agencies.

Regular street sweeping of roadways and streets can reduce the amounts of dusts on the road, thereby reducing the impacts of dusts along and near roadways. The effectiveness of the sweeping equipment, the technology used in the sweeper, and the frequency of sweeping have a direct influence on the amounts and size ranges of soils and dusts collected. The more efficient the collection of particulate material, particularly the finer fractions, the less will be available for dispersion into the Air due to traffic.

Regular street sweeping of roadways and streets can reduce the amounts of dusts on the road, thereby reducing the impacts of dusts along and near roadways. The effectiveness of the sweeping equipment, the technology used in the sweeper, and the frequency of sweeping have a direct influence on the amounts and size ranges of soils and dusts collected. The more efficient the collection of particulate material, particularly the finer fractions, the less will be available for dispersion into the Air due to traffic.