What is Nitrogen Oxide?

The term “nitrogen oxide” refers to a combination of gases made up of oxygen and nitrogen. The two most common nitrogen oxide (NOx) gases are known as nitrogen monoxide (NO) and nitrogen dioxide (NO2). Nitrogen monoxide is also commonly known as nitric oxide. These two gases are both harmful to human health, and the environment so it is important that we recognize these dangers and do all we can to minimize our nitrogen oxide emissions. Nitrogen oxides also play an important role in the production of other harmful pollutants when they react with other gases in the atmosphere such as ground-level ozone, smog, and acidic rain. 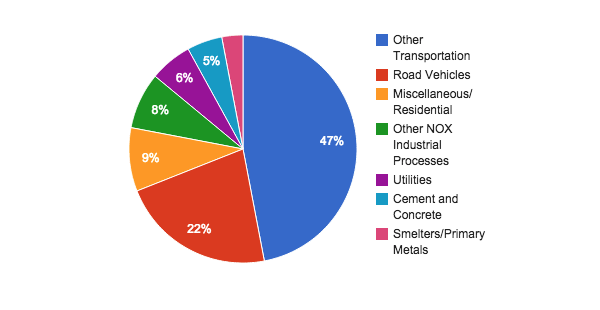 Image and Data from the Government of Ontario as posted on June 7, 2019 (http://www.airqualityontario.com/science/pollutants/nitrogen.php)

What are the Sources of Nitrogen Oxide?

Nitrogen is all around us and is normally relatively un-reactive in the atmosphere. Nitrogen will only react with oxygen when put under specific conditions to form nitrogen oxides such as nitrogen monoxide, and nitrogen dioxide. The most common method that causes nitrogen and oxygen to react and form nitrogen oxides is by combusting fuel, a process where fuel is burned at high temperatures. As can been seen in Figure 1, our everyday activities such as burning fuel for transportation, or using electricity in our homes produced by burning coal or oil, or in power plants, are all activities that directly or indirectly cause the production of nitrogen oxide emissions.

What are the Health Effects of Nitogen Oxides?

What are the Environmental Effects of Nitrogen Oxide?

The main environmental concern regarding nitrogen oxides is when they combine with sulphur dioxide (SO2) to form acid rain. Acid rain forms when nitric and sulphuric acid reacts with water droplets to form a rain cloud. The precipitation that comes out of this rain cloud will be high in acidity. When acid rain continually falls on the same location, the soil and bodies of water surrounding this area slowly become more acidic as well. This changes the living conditions for many plants and animals living on both the land and in the water. Some plants and animals are not able to adapt to these increased acidic conditions and die. Acid rain also affects infrastructures by corroding cars, buildings, and histoical monuments. This costs cities millions of dollars in damages every year!

According to the Ontario Ministry of the Environment June 2005 Transboundary Air Pollution in Ontario Report, transboundary air pollution contributes to over 2700 premature deaths a year in Ontario, puts approximately 12 000 people in hospitals and causes over $5 billion in damage to the province’s people, economy, and environment.

What is being Done?

Hamilton has a number of air monitors that monitor the air quality including levels of nitrogen oxides in the air.

Since the majority of Hamilton’s nitrogen oxide emissions come from transportation, the City has developed a Transportation Master Plan to develop a transportation network which includes transit, cycling, and walking facilities. The City also hosts annual events to promote alternative modes of transportation such as Commuter Challenge Week.

Clean Air Hamilton has a community smog day actions check list which is a list of various actions that are encouraged to be taken by the community on a smog day. These actions will help minimize the severity of the smog day, and give tips to protect the health of your family and yourself.

How Can you Help?

Knowing that the most nitrogen oxide emissions are being caused by our everyday activities such as transportation and energy, we can start by reducing our reliance on cars and chose alternative forms of active transportation such as walking, or biking. Hamilton has many walking trails and bike lanes that can be used. In addition, we can all make an effort to conserve energy at home, and at work by doing simple things such as turning of the lights when leaving the room, or setting our computers to automatically go to sleep after a set time.

1Air Quality in Ontario 2015 Report, Ministry of the Environment and Climate Change, The Province of Ontario   (www.airqualityontario.com/downloads/AirQualityInOntarioReportAndAppendix2015.pdf)