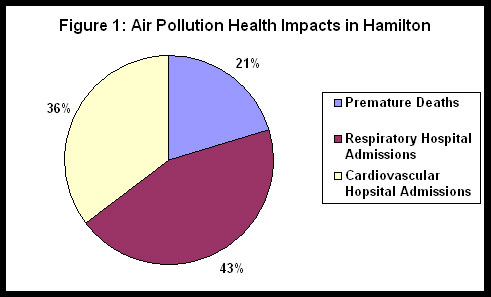 These estimates, which are based on the most recent health studies and Hamilton’s air quality and health statistics, identified NO2, ozone and particulate matter as the air pollutants responsible for greatest number of these health impacts (see Figure 2). 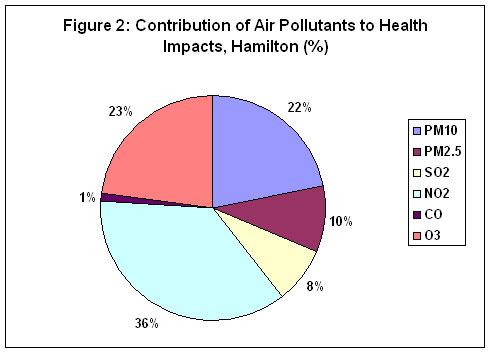 In 2005, the Ontario Medical Association (OMA) updated their estimated cost of illness associated with air pollution. This update of their 2000 report reflects the improved understanding of the health effects, including new studies on the chronic effects of exposure to air pollution.

The OMA report estimates the cost of air pollution to the economy of Ontario at $16 Billion per year! While the OMA did not provide a breakdown of these costs for Hamilton, the local figure would be around $1 Billion, based on the proportion of the local population (~600,000) to the population of the Province of Ontario (~12,500,000). The estimated health impacts on the health of Hamiltonians as a result of smog can be found in the table below.

See the following Fact Sheets for more information about the air pollutants: